Tribute to a life of courage

A somewhat different post today, but an obituary in the Financial Times weekend paper touched me in a way few have in recent times.  A woman who defied the great might of bullies and organised crime of the modern era – the drug cartels – and has finally paid with her life.  Some of you may know of this brave young woman – Dr Maria Santos Gorrostieta Salazar.

The former mayor of a town in western Mexico, who had survived two earlier assassination attempts, has been beaten to death.

The body of Maria Santos Gorrostieta, 36, was found in a ditch with a blow to the head three days after her family had reported her missing.

When she was mayor of the town of Tiquicheo she was twice shot at by gunmen, who also killed her husband.  (Courtesy of BBC News)

I certainly hope many of you have heard her story, one of integrity, of courage in the face of great personal risk, of not giving in to fear, and the capacity for vision and service.  A woman’s life story and history of service that should be heard and retold many times and honored, as a tribute to all who stand up in the name of justice against often insurmountable odds.  A tribute to those who consciously chose to show up and be present, pay attention to what has heart and meaning, tell the truth, and be open to all outcomes.

Copied in below is part of a statement of hers published after the second attempt on her life that took that of her husband and at a time when she displayed her mutilated torso, replete with colostomy bag, to the public as evidence of her commitment.  I hope this tragic story of courage may inspire you to give just a little more of yourself every day when all we may be faced with in our comfortable daily lives is speaking out a little louder, telling our truth with greater courage, and being of service to those we work with in a manner that gives testimony to integrity and honour. 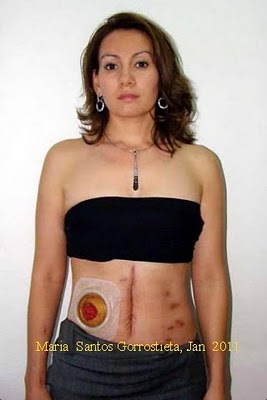 To many, it may seem an act of insolence to show my wounds such as they are, but it was necessary because I had to give my version of the facts, what it really meant to be attacked like that and the traces that these attacks left on me and my people. Because everybody else could say, unsay, talk, invent, defame, except me; and now is the time and place to do so.

What you can see doesn’t need much of an explanation; I simply want your understanding, support and consideration, because despite the fact that I show myself as somebody strong and unbreakable, inside of me, I am still a woman, fragile, a dreamer, a romantic, a mother, but one thing for sure, with an unquenchable determination to continue with my mission of service as head of this administration to which I was elected, and to help those who have less and that still live in a state of great vulnerability.

Throughout this year, I am here with an open mind and a quiet heart, several memories come to mind that no doubt history will judge me on; all I want to say is that walking on this rocky path has not been easy, that it has been permeated with disappointment and despair. I’ll tell you that whatever trench I get, I will defend it with sword and cape, I am faithful to my ideals and to achieve my conviction and my objectives, always convinced that truth and authenticity will set us free. I am grateful with all my heart to those persons who have trusted in my work, to my children, my mother, my brothers, friends, collaborators and to the city that has given its unconditional support.

I have walked a long road towards freedom, and I have tried not to hesitate. I’ve stumbled along the way, but I’ve discovered that great secret; that after climbing a hill, one finds that there are many more behind that. I’ve given myself a moment of rest to look at the glorious landscape that surrounds me, the view back towards the road I’ve traveled. But I can only rest for a moment, because freedom brings with it responsibilities and I don’t dare fall behind. My long road is not yet finished; the footprint that we leave behind in our country depends on the battle that we lose and the loyalty we put into it. Today, it is a privilege to be part of the history of Tiquicheo.

Passionate about living every moment as best I can. Continually emergent and a work in progress
View all posts by amindfullife →
This entry was posted in Life, stories & more and tagged being of service, courage, fear, honour, integrity, maria santos gorrostieta, service, women. Bookmark the permalink.